My  childhood was spent in a three-story pebble-coated masonry house with multiple slate-roofed turrets, surrounded by an acre or two of garden, built by my grandfather just after WW-1. We had three live-in servants: an upstairs maid, a downstairs maid and a cook, and a gardener we shared with two or three neighbors, a Mr Bender. He was a leather-necked retired farmer who sewed grass seed walking on two boards tied to his boots and mowed the lawns with a scythe, scorning the reel-type mower. Every month or so a wash-woman came to do the laundry, and a seamstress came to sew bed linen and mend clothes. We also had a live-in Nanny. To travel, we hired a car with chauffeur. My father planned to buy a car, but flunked his driver test twice, proudly proclaiming that it was the only test he ever failed. He finally got a license shortly before the Nazi invasion in 1938, too late to buy a car.

Our house was in an affluent neighborhood in Döbling, district 19, known as "the Cottage", on a hill near the "Türkenschanz Park". This is still an elaborately landscaped park with a duck pond, waterfalls, playgrounds, sports meadows, a restaurant, and a brick look-out tower. It was built in 1888 by Emperor Franz Joseph on the site of a Turkish defense bastion to commemorate the successful defense of Vienna against the second Turkish siege, (1529 and 1683, which prevented Europe from becoming a Moslem colony of the Ottoman Empire) and to celebrate the integration of many villages into suburban "Greater Vienna", "Gross-Wien", a culturally and economically viable capital worthy of the Hapsburg Empire. Emperor Franz-Joseph also built most of Vienna’s theaters and concert halls, including the famous opera. His son, Prinz Otto Hapsburg still lives in the US.

The hill we lived on also houses one of Vienna’s two astronomical observatories, the university’s "Sternwarte", and the campus of the agriculture and forestry department of the university, the "Hochschule für Bodenkultur". It was and still is the place to live. Our neighbors included the Hungarian operetta composer Imre Kalman, Felix Salten, author of Bambi, Albert Schrödinger and Ludwig Boltzmann, two of the founders of quantum theory, Nicola Tesla the great inventor, Ernst Mach, physicist and psychologist, Auer von Welsbacch, inventor of the gas mantle, zoologist, forester, and one of the earliest ecologists. He got the government to install bat houses along the Danube to control mosquitoes, instead of using pesticides. Then there was Karl Terzaghi, inventor of soil mechanics, Pekarek, the tea importer, movie actress Hedy Kiesler, better known as Hedy Lamarr, and her mother, who lived on the top floor of the Pekarek house, and our immediate neighbor, the president of Brown-Boveri - Austria. There was also our cousin Alfred Weiss, his wife Luzi, and his two daughters Franzi and Evi. Uncle Alfred owned the Arabia company, second-largest importer of tea and coffee, with coffee houses in all the major cities in Austria. After WW-2 Uncle Alfred bought and restored the Auersperg Palace in downtown Vienna, and the Loudon Palace in Hadersdorf, both of which had been gutted by the Russian army. The Auersperg palace housed an art gallery and a glass-domed "winter garden" where Mozart often played. Uncle Alfred installed his company headquarters in the cellar and turned the palace into an art museum, a very elegant restaurant and diplomatic function hall, where the international atomic energy commission was founded..

My earliest childhood memories date to the birth of my brother Eric, when I was three. He was frail, underweight, a fussy eater, manipulative, and always spoiled as Mutti’s favorite. I don’t remember any resentment at being the second class sibling. I was a happy loner. I found out only recently (in 2004) that Eric had tuberculosis, but that I was never told because tb was socially unacceptable as a poor persons disease. Eric had to be home-schooled, and couldn’t have friends. I only remember that Mutti took him to a high-altitude sanatorium in the Alps called "Kaltenleutgeben" for several weeks, and he came back cured. He developed appetite, gained weight, and only a few lesions remained in his lungs.

When I was four a new nanny came: Miss Emma Schramm. She announced that she didn’t speak German, and that we would have to speak to her in English if we wanted anything. Within six months both of us spoke English, and we only found out years later that Miss Emma spoke German fluently. She lived in a room next to our nursery room and took constant care of us. Only rarely did I have intimate contact with my mother. On weekends I often had breakfast with my parents in father’s study. 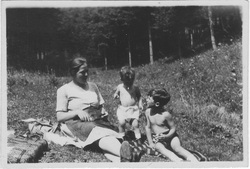 Miss Emma was a naturalist at heart and had a profound thirst for learning. On her night off, Thursday, she attended adult education lectures at the Urania, Vienna’s continuing education center and astronomical observatory which still exists. The following days she would report to us what she had learned. How cane and beet sugar is made, the planets of the solar system, the spiders, bats, shell fishes, etc. She took us on excursions in the Vienna Woods, the "Wienerwald", finding mushrooms, fossil shells embedded in the rocks, edible thistles, shrubs and trees. She also told us history and mythology on our walks. We learned about Joan of Arc, Wotan, Siegfried and the Nibelungen saga, Egypt, the Vikings, Columbus, the Saxons and Normans, Rome, Greece, Sodom and Gomorrah, David and Goliath, and other biblical legends. She aroused my interest in history sufficiently to make me read in the 24-volume "Schlosser’s Weltgeschichte" and other adult source material on the floor at the foot of our bookshelves.

At one point, I was enrolled in an English-speaking Kindergarten, and later in a Swedish gym run by Miss Emma’s sister, Olga. Miss Emma subscribed to a weekly English children paper called "Tiger Tim".

Miss Emma loved arts and crafts. She bought us coping saws, vises, files and other tools, and taught us how to make picture frames, games, and props for our toy trains. She introduced me to erector sets, which became my dominant pre-school interest. Märklin, the steel sets, and Matador, the oak wood sets, with upgrade sets every birthday and Christmas. I also had a passion for transportation and vehicle dynamics. My cousin Paul Jellenik gave me his hand-me-down model railroad which I cherished. When outdoors, I rode up and down local streets first on a tricycle, then a "Holländer" (four-wheeler hand-propelled by a rocker and foot-steered by a rudder-type bar which worked opposite to an airplane rudder (to my later concern). Then I graduated to the ubiquitous scooter, a larger-wheel version of the recently re-discovered scooters, and finally bicycles of increasing sophistication, ending with a Sturmey Archer planetary 3-gear transmission, the very latest in 1936, on which I took all-day excursions into the Vienna Woods. I was fascinated by tradesmen who came to our house, and spent much time watching the local locksmith, carpenter, cabinetmaker, upholsterer, shoemaker, plumber, bike mechanic working in our house and in their shops. I collected tools the rest of my life.

The nearest grade school was a half-hour walk away at the foot of our hill in Währing ,district 18, a blue-collar neighborhood, where I was much bullied because of being an odd-ball and a rich kid from the Cottage district. My grade school memories feature many black eyes and bloody noses fighting bullies in defense of myself and other odd-balls.

I made one meaningful and lasting friendship: Walter Vogel, who lived half-way down our hill. We built bike obstacle courses in our garden using the "snow planks" that Mr Bender laid down on the walkways in winter, and dared each other to ride up a ramp over a plank that teetered on top of a six foot ladder. We made all-day bike excursions into the hills of the Wienerwald, especially up the new "Höhenstrasse" which had just been built from Grinzing up the Kalenberg, and wasn’t open to car traffic yet. We loved to ride down the switchback curves to see just how fast we could go. I remember topping 65 km/hr and occasional skinned knees. It’s a miracle we survived.

I had a rare inter-racial friendship when I was about eight. A neighbor and tropical disease specialist at the University came back from Africa with a five year old orphaned boy whom we invited almost daily through a hole in the fence. He spoke neither German nor English, but we managed to communicate somehow, as children always do. People stopped on the sidewalk to stare at our black playmate - a rarity few Austrians had ever seen. Our little friend basked in the attention and clowned in response.

Summers were spent in the small town of Brüsau (now Bresova na Svitova) in Moravia, where my Grandfather Siegfried Jellenik was the beloved district physician to three generations. We went there with mother and Miss Emma, and father joined us for an occasional week, and sometimes took us on an excursion to the Austrian Alps. We spent one or two weeks every summer visiting the Spitz farm in Rakwitz, grandmother’s ancestral family farm. It was one of the largest and most advanced in the county, with 120 dairy cows, the first pasteurizing machine, a steam tractor, two dozen horses, their own blacksmith shop, and their own school-chapel building for family and hired hands. During the German occupation the Spitz family was killed in concentration camps, and during the even more brutal Russian occupation the farm became a state collective. After liberation, the residence became a restaurant, and the farm is a winery which makes prize-winning champagne, both privately owned. There is nobody left in Rakwitz or Brüsau who speaks German, or remembers our ancestors. 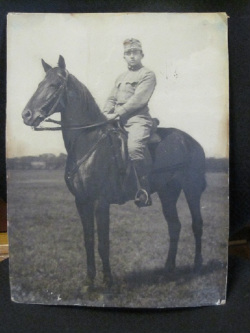 Adolf Felix Jellenik ("Uncle Bubi"): 1903-1945
Mother’s younger brother Adolf Felix Jellenik, known as uncle Bubi was a baby-faced giant. He was a dentist in Brünn, married to aunt Gitta (Brigitta) a beauty. They were frequent visitors. He played the violin an Gitta sang Schubert sings with a beautiful voice. Uncle Bubi was also a captain in the cavalry reserve and occasionally stopped with his company enroute to summer maneuvers. The dozen or so soldiers washed their horses in the river behind our house and spent a night in tents. Uncle Bubi also liked to hunt partridges and pheasants, for which I never forgave him. He took me along on a hunting trip once and brought me back somewhat drunk on Slivowitz, for which my father never forgave him. He gave me a three-volume Zoology book called "Brehm’s Tierleben", which aroused my interest in animals.

Miss Emma left when I was eight and was replaced by a daytime English nanny, Mrs Emily Seitz, followed by a daytime French Nanny, Mme Varginaire. Missy Seitz went to take care of Franzi and Evi Weiss, and died in about 1993 in a London nursing home at age 106, as healthy as can be. She ascribed her health to eating six raw garlics every day.